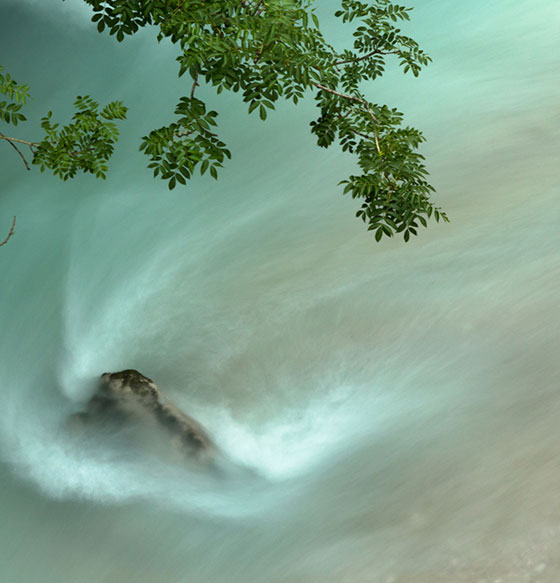 StormSensor® ScuteTM sensors utilize continuous-wave ultrasonic doppler transducers to measure the velocity of water moving through storm, sewer, and coastal systems. The sensor consists of a source transducer and an observer transducer. Acoustic pulses are generated by the source transducer at a known frequency. The pulses bounce off particulates and bubbles in the water and are reflected back to the observer transducer. The sensor measures the change in frequency, or doppler shift, of the acoustic pulses. That shift is translated into velocity.

Measuring accurate velocity requires sufficient water force and coverage. In addition, turbulent flows can cause errors in readings. In fully developed flows, laminar flows exhibit a lower Reynolds number of less than 2,300. Turbulent flows, which result from differences in the water’s speed and direction, exhibit higher Reynolds numbers (typically greater than 2,900), and as a result, higher variability in velocity measurements.

Between laminar and turbulent flow, there are also transitional flow states, which are most common within sewer systems in real-world applications. For instance, a fully developed flow is one where flow characteristics do not change with increasing distance. As sewers are variable and complicated systems, they often do not exhibit long distances with identical flow characteristics: for example, due to connections, inflow and infiltration (I&I), or changes in geometry. However, flows are not necessarily fully turbulent either, especially in large interceptor sewers for combined or sanitary sewage, because there are regular and significant baseflow volumes that appear to be smooth to the observing eye.

StormSensor® Scutes™ are designed to measure the average velocity across the vertical water column, i.e., from the top to the bottom of the flow profile. The Scutes™ can accurately measure velocity at speeds of up to ±20 feet per second (ft/s) with a resolution of 0.1 ft/s and accuracy of ±0.3 ft/s. For a single reported velocity reading, the sensor captures a minimum of 20 readings and reports the average. A minimum of 1 inch of water within the pipe is required to completely cover the sensor. Measurement of flows in both directions are possible; however, accuracy is greater in the defined positive direction, as shown in Figure 3, due to the smoother physical profile of that end of the sensor.

Because data quality is important when monitoring sewer and storm systems—and making critical decisions based on those data, StormSensor® has conducted a series of comparisons with other velocity sensors available on the market. A summary of tests conducted is provided below.

StormSensor® engineers test every new Scute™ sensor post-manufacturing and pre-shipment. The Scute™ and the comparison sensor are in series within the lab bench setup. The reference sensor is in a 2-inch-diameter pipe full of water, and the Scutes™ are tested in a 12-inch-diamter pipe with 2 to 4 inches of water. Each sensor captures a minimum of 20 velocity measurements; those readings are averaged and then compared against readings captured from a Hall-Effect flow meter (e.g., DIGITEN FL-1608). This is physical flow measurement device, as the water pushes a turbine in the meter.

All sensors that are shipped to customers are certified to meet the accuracy requirements identified in our specifications.

The performance of StormSensor® and Hach velocity sensors were compared in a low-flow combined system in the Midwest. The sensors were placed in series within the 14.5-inch-diameter pipe, with the Hach sensor located upstream of the StormSensor® Scute™. Water level within the pipe averaged approximately 2.45 inches. StormSensor® velocity measurements averaged approximately 0.05 ft/s higher than Hach velocity readings collected over the course of a 2-week test period, with average velocities of 0.47 and 0.42 ft/sec, respectively. Variability in readings was observed in both sensors; the accuracy range of the Hach sensor was not provided.

The performance of StormSensor® and ISCO velocity sensors were compared in a high-turbulence sanitary system in the Midwest. Comparison measurements included:

Two StormSensor® Scutes™ were installed next to each other at a single manhole location within a 54-inch-diameter pipe within a sanitary system that exhibited a high degree of turbulence. When compared against each other over the same timeframe, StormSensor® Scutes™ demonstrated a high degree of correlation. With an average velocity of 2.85 ft/s measured at Scute™ Box 1, and 2.97 ft/s in Scute™ Box 2, velocity measurements between the two Scutes™ averaged within 4% of each other over the period reviewed.

However, StormSensor® velocity measurements, which were collected from a 54-inch pipe with water levels ranging from approximately 25 to 35 inches, averaged 1.16 ft/s higher than ISCO velocity readings captured at the adjacent downstream location. In turbulent systems, velocity changes across the flow profiles, especially as you get closer to the sidewalls. To determine if placement of the sensors was a contributing factor to the differences in measured velocity between the ISCO and StormSensor Scutes™, a handheld velocity sensor was used to measure velocity throughout the flow profile at one upstream and one downstream location. ISCO and StormSensor® Scute™ sensors were installed at both locations, and the data were compared to the average across the flow profile.

Due to the turbulent nature of the system, StormSensor® implemented a 2-hour rolling mean that is presented in the charts on Terrapin™ to identify trends in flow, which is calculated according to Q=VA.

In summary, the results of field and lab testing indicate that StormSensor® Scutes™ measure velocity well within the accuracy range set in the specifications (up to ±20 feet per second (ft/s) with a resolution of 0.1 ft/s and accuracy of ±0.3 ft/s), and the StormSensor® readings correlate strongly with velocity readings captured across a range of sensing technologies and environments.