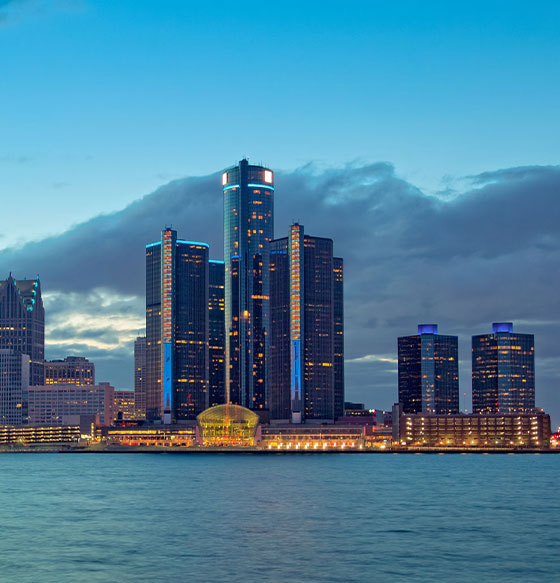 StormSensor® and Detroit Water and Sewerage District (DWSD) are in the early stages of a two-year system-wide flow monitoring study in Detroit, Michigan. The goals of the study are to calibrate the sewer model for Detroit and provide the flow monitoring data needed for condition assessments and sewer share allocations for Detroit’s combined sewer system. This study is part of a broader effort to develop largescale sewershed models using both permanent rainfall and permanent sewer flow metering data provided by StormSensor. Part of the study is aimed at monitoring hydraulic interactions between DWSD’s sewersheds, as they can overflow from one to another during wet weather events.

The scale of the project is substantial, and with a limited budget, DWSD needed an effective, accurate technology that allowed them to meet the requirements of the study. In addition modeled data, as well as flow, estimated using only depth sensors, did not appear to accurately represent actual flow conditions. Generating accurate flow values from sewershed models is difficult. Most drainage areas are designed using models based on Manning’s Equation, which was developed in the late 19th century and fitted based
on empirical flow observations.

The process for using Manning’s Equation includes selecting pre-set coefficients, such as the roughness coefficient, which is based on theoretical pipe characteristics and design. In current hydraulic design practices, Manning’s Equation is typically used to assess system sizing as well as to predict flows based on level or depth observations collected during a model validation study with limited time periods and sample locations. If the inputs to this equation are incorrect for the system, model outputs and subsequent plans based on those outputs will be significantly affected. The goal of validation studies is often to confirm and update inputs to Manning’s Equation to generate more accurate flow estimates.

A network of 10 StormSensor® Scute™ sensors was installed in Summer 2020. The locations were selected to monitor sewersheds in areas without permanent meters or previous monitoring and calibration efforts. Each Scute™ sensor provides real-time area-velocity flow measurements (via depth and velocity) and temperature at every monitoring point, while the StormSensor® Terrapin™ software combines the sensor data with real-time, hyperlocal weather conditions. Data will be collected for 2 years to capture seasonal variations and storm events with various antecedent moisture conditions. The network will continue to be expanded over the course of the project.

As part of this study, StormSensor® is developing an automated calibration algorithm to use StormSensor’s real-time flow data to determine customized, location-specific coefficients for situations where modelling with Manning’s Equation is still necessary. These calibration values capture influences within the system that have remained unquantified until now. These calibrated values will therefore help communities better understand critical flow dynamics within their stormwater and sewer systems, where water is moving faster or slower than assumed based on textbook values. It will also help communities discover the root causes—and quantification—of flood risk and backups.

The accuracy of the calibrated values for individual monitoring points ranged from 60% to 139% of measured flow (Table 1). Flows within the DWSD combined sewer network are interrelated, so increases in flows in one area of the city reflect impacts or precipitation events upstream of the monitored location. Monitoring point MP1 exhibits the greatest flow across the measured monitoring points. It is located downstream of much of the city’s system and frequently sees upstream impacts, which suggests a need for additional upstream monitoring to determine sources of inputs and the potential for I/I. MP1 also shows the greatest discrepancies between measured and estimated flows.

Figure 3 presents flow comparisons at monitoring point MP4. Note that measured flow and our proprietary calibrated flows at peak was about 250 cfs. However, using the uncalibrated Manning’s Equation resulted in an estimated flow of 1,000 cfs. Both baseline and peak flows are overestimated when using the standard roughness coefficient and Manning’s Equation to calculate flow. StormSensor’s calibrated flow calculations are generally within the acceptable range (+/- 30%) of measured flow.

These data suggest that, on average, water is flowing far slower than estimated using the standard Manning’s Equation. When compared to modeled flow, it appears that this system cannot convey water as quickly as it was designed to do; therefore, combined sewer overflows (CSOs) and floods will occur more frequently. We see similar trends in other storm, combined, and sanitary systems; most estimated flows range from 4 to 10 times slower than those estimated using the standard, uncalibrated Manning’s Equation. These findings—and the variability quantified both within and between systems—highlight how critical it is to accurately measure flow across entire systems when designing upgrades and retrofits to ensure that capital improvements will fully mitigate flood risk and eliminate overflows.