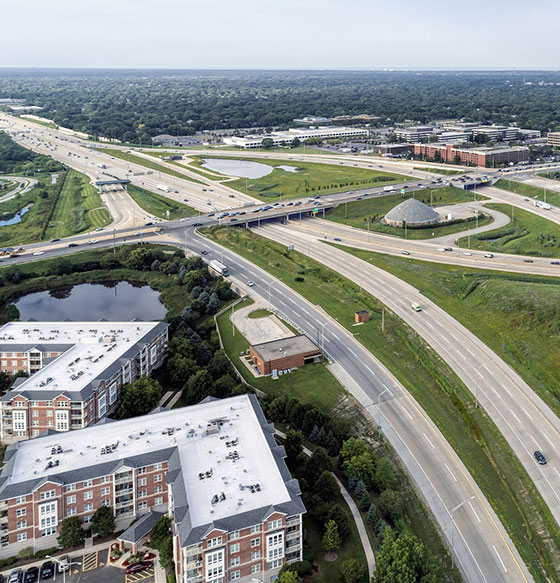 With extreme rain events and associated flooding becoming more frequent, the Village of Deerfield, IL, is completing aVillage-wide Storm Water MasterPlan (SWMP) in partnership with Christopher B. Burke Engineering, Ltd (CBBEL), to identify problem areas, solutions, and likely costs for improvements to the existing stormwater system. As part of the plan development, model validation is required to ensure that the model estimates for flow through the stormwater system during storm events are consistent with actual conditions. Doing so ensures that the solutions and associated costs are evaluated based on the best data possible.

Model validation via a monitoring program is vital to stormwater management: without real data, plans are based on assumptions which may—or may not—represent how the system is functioning. For example, most models rely heavily on the Manning Equation to estimate flow rates and volumes. This method was developed for use in long, straight-line channels and is not well suited to systems with the turns, junctions, etc., that tend to make up the bulk of stormwater infrastructure. Without monitoring data to validate and update model assumptions, a lot of money can be spent in the wrong place or on the wrong solutions.

That being said, all monitoring approaches are not created equal. Due to budget constraints, many regions monitor only select parameters (e.g., depth only) and select locations (e.g., two outfalls) for a short period of time (e.g., 1 to 3 months). Data from these programs are limited both spatially and temporally, meaning that even seemingly validated models still contain many extrapolations and assumptions that introduce risk into the model output.

CBBEL contracted StormSensor with the goal of implementing a comprehensive monitoring solution. They recognized the need for a thorough approach because even in their relatively small geographic area (5.5 sq. mi.), the Village noted discrepancies between their model predictions and actual events; namely, the frequent flooding common throughout the region. Their stormwater system has a lot of variation in age and flow dynamics; therefore, a dense monitoring network would be required to parse out the nuances of the system and prioritize improvements.

Appropriate sensor placement is critical for effective model validation. StormSensor’s StormSite™ network planning tool optimized the impact of the monitoring network based on system complexity and areas with known flooding. The layout of the monitoring plan in Deerfield was centered in regions that routinely flood, and it further focused on looking at factors that could cause flow rates to differ from what a Manning Equation-based model would estimate: junctions, curves, varying pipe sizes, etc. Deerfield deployed 35 Scute™ sensors in six study areas, as shown in Figure 1.

Deerfield is most interested in calibrating their stormwater model during storm events because this is when they are most likely to encounter flooding. Three qualifying storm events occurred since the installation of this network in October/November 2020. Monitoring, to date, has shown some notable differences between flows measured at each monitoring point and what models would have predicted. Estimates made by Manning Equation-based models are consistently high, which is in line with what StormSensor® studies in other regions have shown. Figure 1. The StormSite™ planning tool maps the 35-Scute™ network deployed throughout six flow monitoring areas within the Village of Deerfield.

For example, a storm typical of those causing flooding in urban and suburban regions occurred on Dec. 12, 2020. As shown in Figure 2, this event dropped approximately 1.66 inches of rain in just over 24 hours. The measured flow rates from the monitoring network indicate a striking difference from what a Manning’s based model would have estimated for this storm event (Figure 3). StormSensor’s algorithms can detect that difference, and they can also also utilize direct measurements from the stormwater system to generate calibration factors that can be applied to future models.

Figure 3 displays an example of the validation/calibration for this storm event. The plots in the center compare direct measurements from Scute™ sensors (black) to a typical, uncalibrated, Manning’s based model output (maroon). The directly measured flow is significantly less than that estimated by the Manning Equation (Figure 4). This means the model assumes that the stormwater system conveys much more water, much more quickly than actually occurs.

Similar results were observed across storms and across monitoring points (Figure 5).

The impacts of this difference to stormwater management and planning are considerable. For example, if the model overestimation in carrying capacity is applied throughout an entire stormwater system, then one would expect floods to occur even where the system is built to design specifications. Incidentally, this is exactly what the Deerfield community is experiencing.

To help communities validate and update their models to more accurately depict field conditions, StormSensor® uses direct measurements from Scute™ sensors to calibrate the Manning Equation. Figures 3 through 5 display two versions of this process: a single-value calibration and a multi-value calibration. Both calibration processes bring the estimated flow much closer to those directly measured. The multi-value calibration process, which typically results in a very close fit, can be enabled within Terrapin™, allowing users to view estimated flows in real-time for comparison with their outside models. The single-value calibration can be incorporated into a typical Manning Equation-based model, allowing stormwater managers to more accurately predict storm flows and reduce potential sources of flooding throughout their region.

After comparing the StormSensor® observations with the Manning Equation calculations, StormSensor® observed the real, measured flow was significantly slower than the estimated flow. This suggests that something other than the components of the Manning Equation, which include slope, pipe material, pipe size, and roughness, was responsible for the slower flow and subsequently higher rate of flooding. StormSensor’s single and multi-value calibrations enable communities to more accurately represent field conditions, as well as identify areas at a higher risk of flooding, than would a short-term, depth-only model validation study. In doing so, cities spend only what they need to address flood and overflow risk, and capital improvements can be designed to support variable, complex weather conditions.